Cairo, IL is a small city in a unique location at the extreme southern portion of Illinois, at the confluence of the Ohio River to the east and the Mississippi River to the west.  Its location along both major rivers makes it a desirable location for barge docking and or boat shipping transfers, with numerous large docks along the eastern edge of the community along the west bank of the Ohio River. Generally, the location along two major rivers has played a significant role in the history and the economic conditions of Cairo.

Following is a regional map and an aerial image of Cairo illustrating the rivers to the east and west. 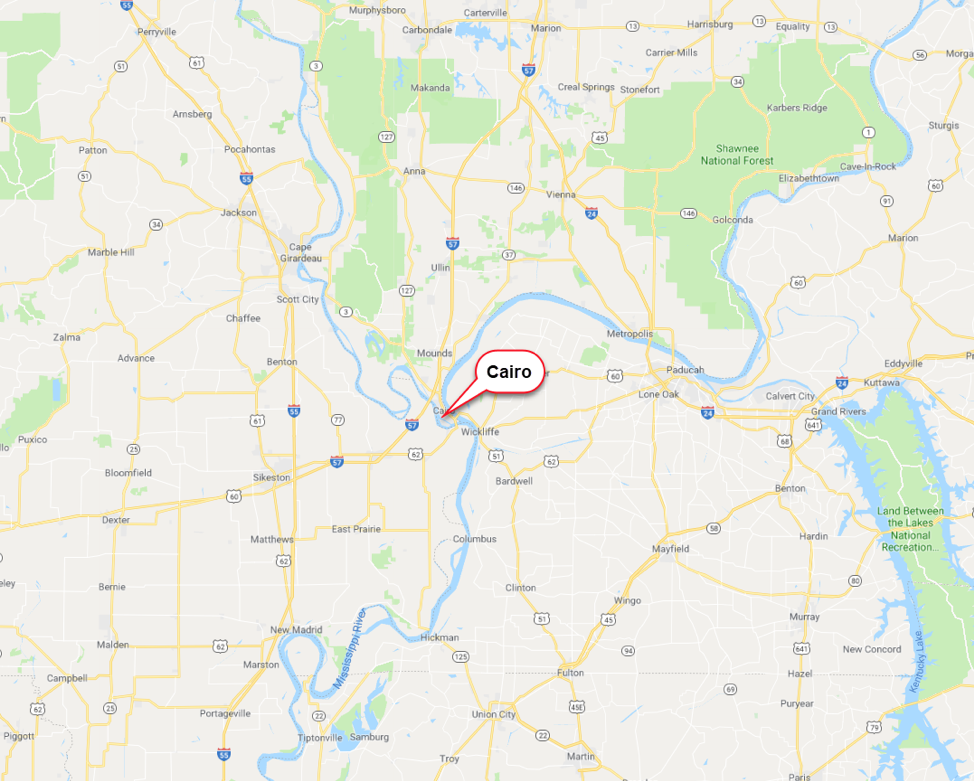 According to an article published April 28, 2018 in The Southern Illinoisannewspaper, the US Department of Housing and Urban Development (HUD) has issued notices to residents of approximately 40 public housing units at Elmwood Apartments and McBride Apartments for them to vacate their units by June 30, 2018, or face eviction proceedings.  The initial notice of the pending property closure was provided to residents in spring 2017 to allow them sufficient time to secure housing elsewhere. Once the existing buildings are vacated, the former public housing properties will be “sealed off” and will likely await future demolition.

“Why is this happening?” one might ask. According to The Southern Illinoisanarticle, one reason HUD is opting to shutter the properties in Cairo and in the nearby village of Thebes, is that the local housing authority overseeing operations can no longer afford to pay the utility costs for the properties. Per The Southern Illinoisanarticle, HUD has cited health and safety risks to tenants due to years of deferred maintenance as one other reason tenants are being asked to vacate properties by the end of June. Additionally, it was reported that HUD was unsuccessful in attempts to attract a housing developer that was willing to take on the risks and challenges of building new multifamily housing in Cairo.

However, upon further investigation of the Cairo market, it appears that demographics, geography, and weak local economic conditions point to the overarching reason why HUD is vacating its public housing in Cairo.  In evaluating demand for rental housing, several variables are commonly considered by developers, lenders, and state housing finance agencies that allocate federal Low-Income Housing Tax Credit funding each year.  We have considered the following data for this market investigation.

We have presented data for within a one-mile radius from the centrally located Cairo post office and within a three-mile radius of the post office (an area that includes the entire city of Cairo), as well as for Alexander County, Illinois, and the United States for comparison purposes.

The following table compares recent population trends for the one and three-mile radii around the Cairo area, Alexander County, Illinois, and the United States.

The preceding table indicates that the share of vacant housing in Cairo (30.8%) is above the high vacancy rate for Alexander County (22.6%) and is more than three times the vacancy rate for Illinois (9.1%).  The local rate of vacant housing is also well above the national level. Note that the majority of the occupied units in Cairo are renter-occupied, while in Alexander County, Illinois, and the U.S. the share of renter households are well below shares of owner households.

The following table illustrates the median and average contract rent levels per the 2011-2015 American Community Survey (ACS) for the Cairo area radii, Alexander County, Illinois, and the United States.

Following is 2017 employment and unemployment data for the Cairo area, Alexander County, Illinois, and the United States.

The following table compares the levels of educational achievement (high school diploma, bachelor’s degree, or graduate/professional degree) for adults 18 and older in the Cairo area, Alexander County, Illinois, and the United States.

We contacted Shawnee Enterprises, Inc., a property management firm with the only remaining affordable rental units in Cairo, to investigate the local rental housing market supply and demand. According to James Covey Jr., the property manager for Little Egypt Estates, Little Egypt Village, and Little Egypt Houses, these existing properties are fully-occupied and fill any vacated units from a waiting list. It is not surprising that with HUD closing more than 180 units combined at the Elmwood and McBride public housing communities, there is reasonable demand for the remaining rental units in Cairo. Additionally, its noteworthy that the 10 units at Little Egypt Estates are being leased by tenants with Housing Choice Vouchers, the 17 units at Little Egypt Village are occupied by tenants receiving Rental Assistance, and the 36 units at Little Egypt Houses operate with a HUD Section 8 contract.  Thus, none of the tenants in the 63 total units managed by Shawnee Enterprises, Inc. are paying the subsidy contract rents, but rather tenants are paying up to 30% of their adjusted gross income toward rent.

The following table illustrates the contract rents being collected by ownership for the subsidized units in Cairo managed by Shawnee Enterprises, Inc.

As illustrated in the preceding table, the management company is collecting subsidy or voucher rents that are significantly higher than the median and average tenant-paid “contract rents” for within three miles of the Cairo post office, which are $221 and $259, respectively. The rents presented in the preceding table, which range from $609 to $808 per month, are more comparable to the median and average tenant-paid “contract rents” statewide presented previously. This suggests that while rental properties in Cairo may be able to collect rents generally similar to the statewide median “contract rent”, the residents in these rental units are likely paying hundreds of dollars less than the reimbursed rental rates.

Lastly, due to the geography of Cairo, flooding potential is an issue and a likely concern for any development in this market, which is located between two major rivers.  Following is the FEMA flood zone map of the Cairo area.

According to FEMA flood map 17003C0220E (dated 5/4/2009), approximately one-quarter of the city is within flood zone AE, or an area with a 1% probability of flooding every year (also known as the “100-year floodplain”). Land in zone AE is considered to be at high risk of flooding under the National Flood Insurance Program. In addition, the entire community of Cairo had to be evacuated in May 2011 during record Mississippi River flooding that year.  Therefore, even with themajority of the city located outside the flood plain due to the presence of levees, the relatively recent probability of flooding in Cairo combined with the cost of flood insurance has likely had a limiting effect on any potential multifamily housing development that could come under consideration in this community.

Overall, it would appear based on the demographic data, economic data, flood zone data, and rental data we have analyzed that future multifamily housing development in Cairo is highly unlikely due to the various challenges facing this community.  Thus, while it may not be HUD’s desire to ask dozens of households to relocate, in this community there are not many additional options, and that is unlikely to change in the future given the analysis we have presented.

Mr. Gault has focused his career primarily on affordable, market rate and student housing apartment developments. He has significant experence with the Low-Income Housing Tax Credit (LIHTC) program and has conducted field work and/or worked to author more than 1,700 market studies, letters, rent comparability studies or appraisals. Mr. Gault has gathered field data on more than 5,000 apartment and condominium properties in more than 40 states.

He is a graduate of the Ohio University E.W. Scripps School of Journalism in 1999 with a B.S. in Public Relations and a specialization in Environmental Studies. A September 2015 special feature magazine article on “Student Housing Trends Nationwide” for the Novogradac Journal of Tax Credits is among his published professional work.

Specialty Valuation Group (SVG) is a commercial real estate appraisal and market study firm based in Dublin, OH that provides superior valuation and market analysis services for many different asset-types throughout the United States. Our group has significant experience in the valuation and appraisal of the following property types: